Since I've only written 28 posts since I started this almost exactly two years ago (most of those are recipes I think), and this is the first one since September, I've come to the conclusion that I'm not a blogger. I don't usually have anything profound to say anyway, so I just read the blogs of people who do.

I am excited about what's been going on in my house recently though and thought I'd write out my thoughts. If no one else reads it, that's okay. A little over a week ago, Elsie was still waking up every couple of hours at night and I was completely exhausted. I felt barely able to function during the day after too many months of too little sleep. I was still treating her like a newborn, letting her fall asleep while eating and then trying to put her down already asleep. Of course she kept waking up because she wanted me. Then during the day I would let her fall asleep on me all the time, but she woke up whenever I had to put her down or because Eva was making noise. She almost never got a good nap. It hit me all of a sudden last week that she is six months old and should be able to sleep on her own. I think I knew this in my head; it was just easier (or so I thought) to keep doing what we were doing. We started letting her cry it out, and she adjusted almost immediately! She now sleeps 10-12 straight at night and takes three solid naps during the day, in her crib. She's such a happy baby now, and Mommy gets to sleep all night too. Thank you God.

This new schedule has given me another amazing blessing also, one I didn't expect or realize I needed: a restored relationship with Eva. For the first two years of her life, I was the person who cared for her most of the time, and we had a super close bond. She was my baby. Immediately after Elsie was born, I had to depend on other people (namely Damon and our parents) to take care of Eva while I was dealing with Elsie and recovering from the c-section. While I was so thankful for the help, those first couple of weeks were extremely difficult for me emotionally (I'm sure the hormones didn't help). I felt like I couldn't be there for her, that I didn't have anything to do with her. I love her so much and oh how I missed her.

In the months since then, she has gotten into the "terrible twos" like crazy and has generally misbehaved more when I've had to pay attention to Elsie. I felt like my entire day was spent telling her no and disciplining her while trying to get Elsie to sleep. I was exasperated to the point of tears much of the time because she was so defiant. She usually acted like a perfect angel for Damon, of course. To my amazement, since Elsie started taking naps in her crib, I've noticed a huge change in Eva. I can have one-on-one time with her again, and we actually have fun together, rather than just a power struggle. Though she still has her sinful moments, of course...I feel like I have my sweet baby girl back. 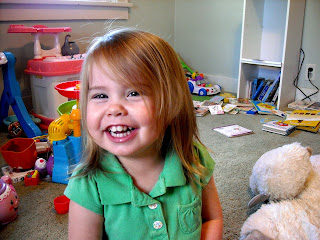 Getting Elsie to sleep on her own has also given me more opportunities to spend time alone with God and with Damon, time I had also been greatly missing, more than I even realized. I am so thankful for God's grace and blessing in the past week. I often try to depend only on my own strength to get through each day and look to find my worth in my own abilities as a mom rather than in Christ, and this has been a wonderful reminder that God does provide and that peace and rest come from trusting in Him and not in myself.