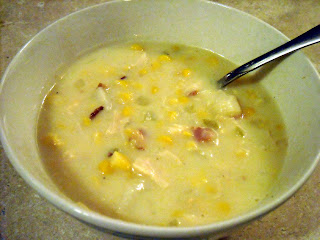 In October of 2007, Damon and I were in the midst of change. We had resigned our membership at the church we'd called home since we first started dating (the church we got married in one June day in 2003), to join a brand new one called The Oaks. We had also just gotten a brand new car in the hopes that we'd be able to make the hour drive to church without breaking down on the highway. :)

We took a long weekend to go to Kelleys Island in Lake Erie toward the end of October. My family used to go camp or stay in a condo there almost every year, but Damon had never been. I knew he would like it because it's quiet and not as tourist-y as the surrounding Cedar Point, Put-in-Bay, etc., especially in the off season. It was a good opportunity to relax. We decided to try the Bed & Breakfast thing and stayed with this really sweet couple, Bill and June Campbell, who own a beautiful house on the west side of the island (sunsets over the lake were great). 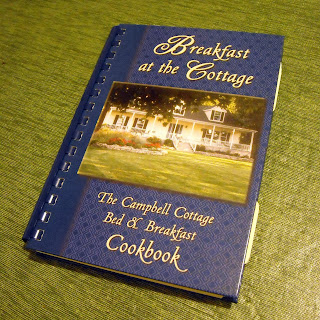 I'd never made anything out of it, until tonight. I've been trying to cook more since we now have a family to feed, and when I was browsing through her book the other day this one popped out at me. Chicken corn chowder has been my favorite Campbell's Chunky Soup lately, so I thought I would try making it myself. Turned out pretty yummy.

I had no idea how much soup it would make, so I doubled the recipe thinking leftovers wouldn't be a bad thing - well it made a LOT. Like, our big stock pot was 2/3 full. I gave a tupperware full to our neighbors and we'll still be eating it for a couple more days. :) p.s., June's recipe didn't have chicken in it - I just added a couple cans of chicken to mine when I put in the corn and everything.

In large saucepan, cook bacon until crisp. Pour off bacon drippings, saving 2 Tb in pan. Saute onion and celery with bacon and drippings until soft. Add diced potato and water. Cover and simmer until potatoes are tender, about 6-8 minutes. Stir in milk, garlic powder, dry mustard, pepper, sugar and corn. Add salt and pepper to taste. Cook over low heat until it begins to simmer. Stir milk and cornstarch together, and stir into chowder until thickened. Serve hot with crackers or fresh homemade bread.


Now I'm thinking about that strawberry stuffed french toast again - maybe I should try making that one soon.......
Posted by Kate Titus at 5:41 PM 1 comment:

I was in Beavercreek for Eva's 12 month check up yesterday, and had two very different experiences with customer service. After the doctor visit it was time for lunch (good, because the girl was a bit cranky after two shots and having blood drawn, and food usually calms her down ;)). I went to Chik-fil-a because it was right across the street and, let's face it, they have the most amazing chicken sandwich in the universe.

I had to park in one of the farthest parking spots since it was the lunch rush. I was carrying Eva toward the building in the rain when an employee came out with an umbrella and walked us the rest of the way to the door, and he was super polite. I went up to the counter and placed my order and the cashier told me to go ahead and get Eva situated and she would bring the food out to me, which she did very quickly. I had just gotten Eva in the high chair when I realized that I forgot about ketchup and mayo. I was about to pick her up to go get some when a manager came by and asked if she could bring me ketchup or anything. I said yes, a mayo and a few ketchups would be great, and she said "and a straw and some napkins?" Duh, I hadn't even noticed I didn't have those either. Long story short: I. love. Chik-fil-a.

I started typing out my example of bad customer service, namely trying to get my windshield wiper blades replaced at wal-mart after lunch (it was an hour and a half event in which I ended up having them put the old blades back on because they didn't know what they were doing, and Brian Murphy replaced them for us himself after community group last night, bless him), but I think the story would be longer than I feel like writing and could easily turn into ranting. I will just say that it was a lesson in patience and grace while dealing with a baby who was WAY overdue for a nap. I should probably just focus on the good part of my day anyway and forget about the rough part. :)
Posted by Kate Titus at 10:10 AM 2 comments: 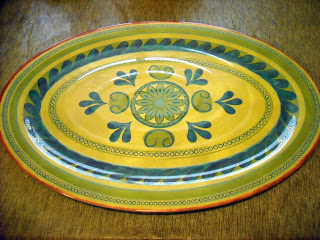 Totally ripping off Steph's "I'm a fan of..." here, but I have to share how much I love this platter I got at Target. For the longest time the only serving tray I had that was big enough to hold 24 cupcakes had snowmen on it - not the best for a summer party. Then I found this. I love it because it's pretty and looks like it would be heavier ceramic or something, but it's actually plastic.

It fits all the cupcakes with room to spare: 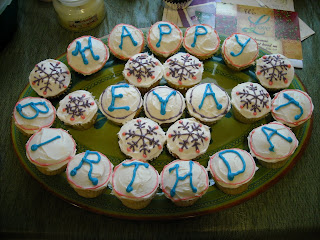