I made this delicious salad for a cook-out tomorrow with fellow tenants in our apartment complex. If you're looking for a side/dessert salad that's a little different (and yummier) than the usual fruit salad, please make this! It really tastes like taffied apples and makes me look forward to fall, my favorite season. I got the recipe from my mom, who got it from a former coworker. Make it the night before you need it to let it set/blend flavors.

Drain the juice from the pineapple into a saucepan. Add sugar, vinegar, flour and egg. Cook until mixture thickens and let cool a bit. Then stir in Cool Whip, apples, the pineapple, marshmallows and peanuts (I had to transfer it to a bigger bowl to add everything; my saucepan wasn't very big). Let set in refrigerator overnight.
Posted by Kate Titus at 5:40 PM No comments: 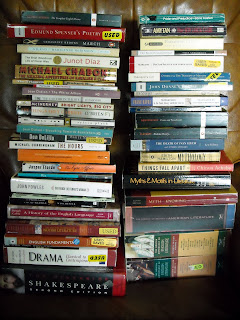 I meant to do this after I graduated from Cedarville three months ago, but, you know, time gets away from you (holy cow, is it August already?). I slowly chipped away at my English degree for eleven years and finally finished this year. During those years, I got married and established in my job as Coordinator in the Physical Plant at the university, and have been blessed with two children (one currently incubating). I mostly kept taking classes because I could get them for free as a staff member, and I wanted to finish what I started. I don't currently have plans to use my degree in a career, as I'm enjoying being home with the aforementioned kids. If I ever do get a job in my "field" (I'd like to write and/or edit nonfiction - journalistic type stuff), great, but if not, I consider myself blessed simply for the experience of learning to think and write well while reading great literature. I am also thankful for the intelligent, abundantly passionate professors from whom I have learned. If all I get out of this degree is the ability to think critically and to share that skill, as well as a passion for literature, with my children, it was worth it.

Here are just a few of the works I have studied in my time at Cedarville (yes, all of the books in the above photo are from my classes - and I'm sure some of what I've read is not included). Keep in mind that this list contains mostly novels and plays, not the many (MANY) wonderful short stories, nonfiction essays and poems I have read as part of anthologies of American and British literature, both old and recent (oh yeah, and FILMS I have watched - I loved the Christian Motifs in Film class and would be interested in sitting through it again just to hear the discussions). If anyone would like to borrow any of these from me, I'd be glad to share!

Looking back, I really can't believe how many wonderful works of literature I have read. And this may sound odd, but I also really enjoyed reading The History of the English Language for the class on the same subject (go, Dr. Calhoun!). One of the things I enjoyed about my literature classes is that I was forced to read great stuff; otherwise, I probably wouldn't have made time for it. I would love to go back through these and read them all again; I hope to do so. I am blessed.
Posted by Kate Titus at 10:41 AM No comments: