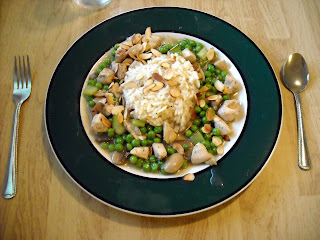 I had the ingredients to make this for our anniversary (June 28), but I ended up having a cold and didn't feel up to it, so Damon made it instead. Definitely a good thing, because he's a much better cook than I am (from his 5 years of experience in the cafeteria at Cedarville while he was finishing his degree - I worked there too, but only for a year and pretty much all I made was pizza).

The recipe is from a cookbook I got from June Campbell, the owner of a bed & breakfast on Kelleys Island in Lake Erie. We took a long weekend up there in October of 2007. June's breakfasts were amazing so I bought her book. Damon tweaked this recipe by adding salt and pepper and cooking wine to the saute-ing chicken.

Saute chicken in oil until cooked, about 3-5 minutes. Add soy sauce, peas, celery, mushrooms and boiling water. Cover and simmer for 4 minutes. Blend cornstarch and cold water. Add to meat mixture, stirring, and cook until it boils and mixture thickens. Sprinkle with almonds. Serve with rice and soy sauce.

Yummo.
Posted by Kate Titus at 6:24 PM No comments: